As part of my inadvertent obligation to visit all three coasts within a years time, Chicago finally made my list.  I had been to NYC, Philly, DC, and SF so it was well overdue.  I had a friend who had been keeping track of my travels and was also on the list to visit so this made the perfect excuse to “get it done”.  I say that like it was a chore and it most certainly was not.  Maybe when the thought first entered my mind it was. I had never been to Chicago and all I really knew of it was deep dish pizza and the Blues Brothers.  Even though I was a musician, and the Blues Brothers was an entertaining flick, it was in it’s heyday when I was very much a studying musician.  I was not watching a lot of TV and/or movies in those days.  So while I had seen the movie, it never really stuck with me like it has with others. Still, I wanted to see and hangout with my friend Scott Norris (incredible artist, check him out here) and do some shooting in the process.    Being a part of the teaching institute The Arcanum, both Scott and I decided to make it a party and invite other members to join us. Unfortunately, most everyone that was to attend, bailed out, and it ended up being only 5 of us which wound up being just perfect.   Joining us for the day was my better half Dani (OmniaSubSole.com), the awesomely talented Greg Croasdill (www.croasdill.com), and Chicago native/Ireland transplant Deidre Hayes (deirdrehayesphotography.com) A small but very familiar group of super talented people, so all was good!

We decided to avoid traffic and parking and stay in the Village of Rosemont and I am so glad we did. Rosemont is about 35 minutes west of downtown (by train) and is a gorgeous little village.  We stayed at the Hampton Inn there which was new and wonderfully appointed. We used our stored up Hilton Honors points and got two nights there for $114 total!  Super spacious suite that was clean and the staff was wonderful.  We could not have asked for a better stay.  As a Hilton Honors member, it was a little disappointing to have to pay $30 to park in the hotels parking lot for the two days, but it was still cheaper than downtown.  Generally if you are staying at the hotel (and a gold Hilton Honors member) the parking is free.

The plan was rise at 5am, hop on the Blue line train which was just a few blocks away from the hotel, ride that downtown to the Jackson stop and get to Cloud Gate (the bean) for sunrise.  Greg was on board to meet us there and was already shooting by the time we walked up from our stop (we were about 20 mins behind schedule).  The whole idea was to get the sunrise, avoid the tripod police, and mobs of tourists.  While I LOVE people, I am very choosy about where I have them in my photos.   Everything went perfectly for us and we basically had free reign of the bean.  Even so, I decided to go sans tripod for this walk and brought only a tiny Manfrotto tripod to shoot with.  All of these shots though, were hand-held.  I can safely say, “this is an obligatory place to shoot when in Chicago.” As much so as the Golden gate in San Francisco, and Lady Liberty in New York City.  No matter how many photos you see of Cloud Gate, all of them, including mine, pale in comparison to seeing it in person.  With that said, my first shot, step right up and plop it right in the middle! (Obligation filled)

“Cloud Gate” or “The bean” as it is known is an amazing public piece by Indian-born British artist Anish Kapoor.  The piece was called “Cloud Gate” by Anish because 80% of its surface reflects the Chicago sky it sits beneath.  And though people have a adopted the name “the bean”, the physical shape of the sculpture is not about Chicago’s love for the morning cup o’joe.  It’s meaning goes far deeper than that and you can read about that here.  (Just remember to come back here and finish after you do. 🙂 Go ahead, I’ll wait.)

What first came to my mind when I saw the piece was of course its shape and the reflection.  The bending of the sky (or lack of it this day) and the city skyline.  I did a few symmetry based shots to accentuate the curve of Cloud Gate and its distinctive reflection.  In using symmetry, I attempted to divide the background skyline of straight and tall buildings with the organic shape of the piece.  I feel this effectively breaks my composition into two pieces, subject and background.  I had a little fun with the sky here, and found out later from Deirdre that finding the arrow on the ground was a “thing”. Something she, as a native there had not seen in photos of the piece before. Cool!  I did a thing! 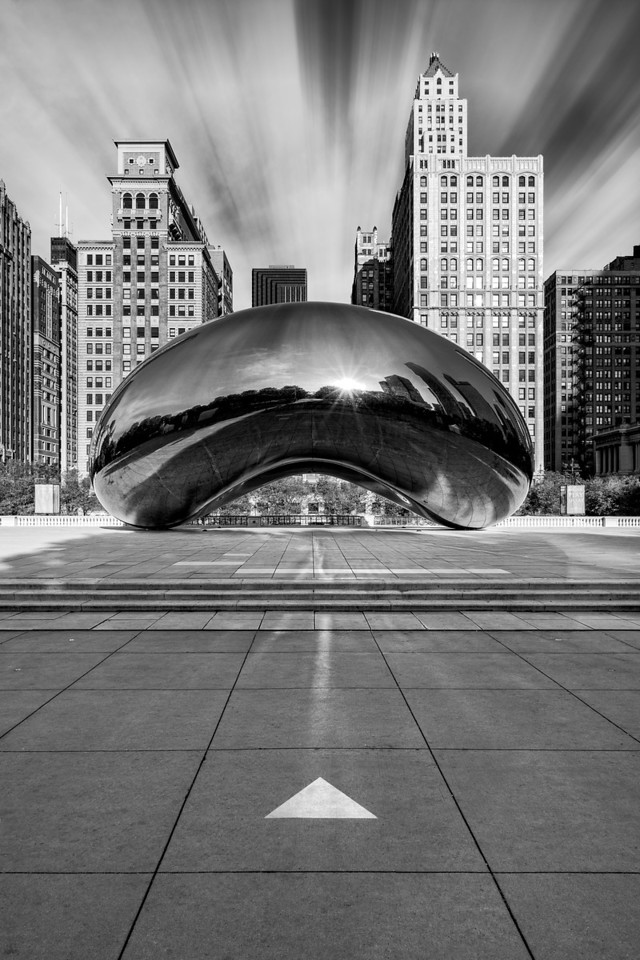 Once I felt I had successfully put together my wide shots to show scope I moved in to study this beast and try something a little different.  I am sure all of these shots have been done before, but they were new to me.  Here I am again, being as symmetrical as possible under the bean.  The sole purpose of this shot was to be my new facebook cover page. It ended up being much more than that for me.

All told, I spent a good 8 hours on this image doing retouching. Removing hand prints, concrete stains, anything that would be a distraction between the photographers and the piece.  I will have a product review coming on the graphics tablet I used for this and how it made this part of the process much easier than using a mouse.  Other than clean up and slight color adjustments the above shot is just as it was taken.  By the way, that is Greg just behind me, we always coordinate what we wear at these photowalks. 😉  The girl in the photo was another photographer and seemed nice and polite.  I was tempted to invite her to join us but she seemed to have her own thing going and that was cool!   While on that subject, I just want to say a bit about the people of Chicago.  Everyone we met there was extremely friendly and nice.  Beautiful people, beautiful city, I just may be in love!

In the plan next was to meet up with Scott at 8:20am when his train arrived at Union Station and then Deidre sometime around noon or as soon as she was available at or near Buckingham Fountain.  Since we had plenty of time before having to take the 20 minute walk across town to meet Scott, I grabbed a few more shots before we headed that way.  This next shot is my personal favorite.  I attempted to show the new and old Chicago here under some nice golden morning light. I am pretty happy with the results. 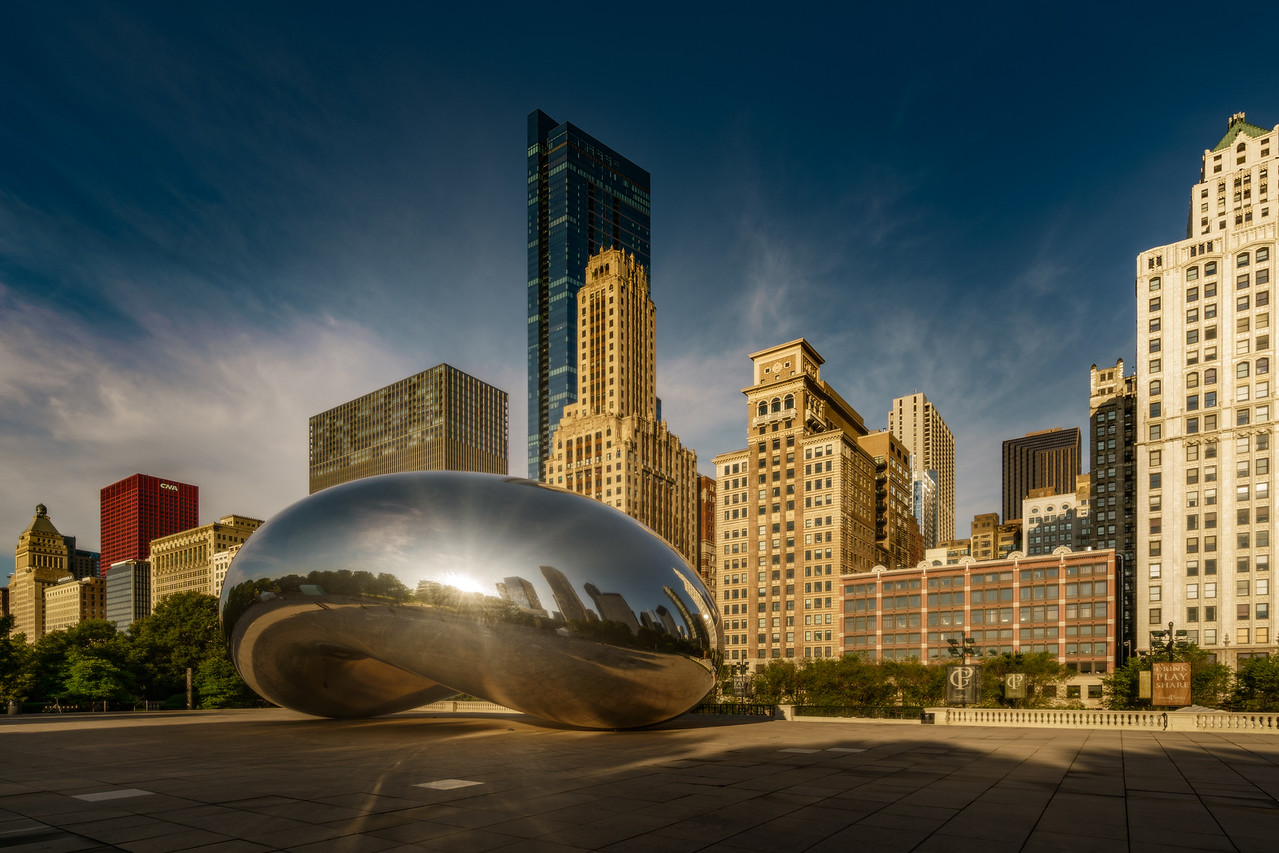 And finally to cap off, here is a shot from later in the afternoon as we were heading over to Buckingham Fountain.

So if you want a shot of the bean without people, go early, or go late, but don’t go anywhere in between.  Either way you choose, it is the obligatory Chicago photograph and you must not only see it, but make it as well.  Thanks for checking out Part I of this multi part series on my shoot in Chicago!  Next up we will be visiting a bit of t he Chicago River Walk, Union Station, some awesome TDF omelettes at Yolk, and beyond!   If you enjoyed this look at Chicago, please use the buttons at the top and bottom and share on your favorite social network! Traffic from your shares are how we keep this site alive!    And finally, if you want to check out all the shots of “the bean” go to THIS LINK.  ~AD explore. photograph. write. repeat.

Please allow me to notify your browser when I post new story
This site is safe and secure and nothing is shared.
ALLOW
BLOCK
%d bloggers like this: